Fairclough has been actively competing a four-in-hand at the highest level of combined driving for many years. He has been National Champion a number of times and was part of the silver medal winning American four-in-hand team at the World Equestrian Games in Kentucky, as well as winning the team bronze at the World Championships in Riesenbeck the following year. The pair of horses he has purchased from Van Tergouw will be added to his four-in-hand that are currently training towards the World Championships in Breda this year. Fairclough wants to not only improve his own four-in-hand but also be a part of the American team. 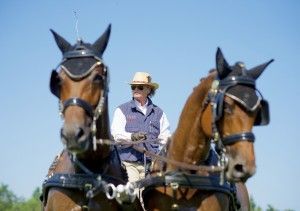 It was a difficult decision for Van Tergouw to sell her own pair of horses. There were a number of reasons that finally tilted the scales in favour of selling. As the owner of the Riant Equestrian Centre in Beekbergen Meike spends a large amount of time both in the Netherlands and in other countries teaching and coaching drivers as well as buying and selling quality driving horses. At the same time a new real estate project, Riant Residences is currently in development and demands a lot of time and attention. The former World Champion has also not driven any shows over the last few years. “I have driven this pair at the highest level. Even though I am passionately active with the driving sport at every level, the last few years I have lost the enjoyment in driving in competitions myself. I haven’t been in agreement with the top sport leadership in the Netherlands and it is a shame to let such a good pair stand on the sidelines”. Fellow driver Koos de Ronde has driven a four-in-hand dressage test with the horses here in Beekbergen, and wanted to take the team directly with him to Windsor. “I have an enormous bond with these horses and I think it is wonderful that Fairclough will be using Riant as home base when he comes to Europe to compete. I have offered to help Jimmy with these horses. Their new home at the Top Brass Farm in the USA is fantastic. The horses will be standing there in a premium accomodation with excellent careIt doesn’t go without saying that Van Tergouw won’t compete again. “This is not a definite stop. Who knows what the future holds. I may once again take part in competitions myself, but there must first be some changes within the Dutch driving sport.”

Van Tergouw lives for combined driving. She coaches many drivers, sells and trains numerous horses and has in particular a passion for the coaching of youth to the international level. Van Tergouw has made a name for herself time and time again by supplying the top drivers in the world such as IJsbrand Chardon, Boyd Exell, Chester Weber and Martin Hölle with top quality horses. Many other top level drivers as well as recreational drivers have horses from the Riant Stables working in front of their carriages. “. In addition to the pair of horses from Van Tergouw, two more horses travelled with them to America. Riant Equestrian Centre sold these to Paul Maye of Team Harmony, who bought Edwin Speks team last year with Mieke’s help. In the 18 months, Fairclough and Van Tergouw have sold 15 horses to the United States.

“Bringing the all aspects of the sport to a higher level. That is my passion!”, says Van Tergouw.